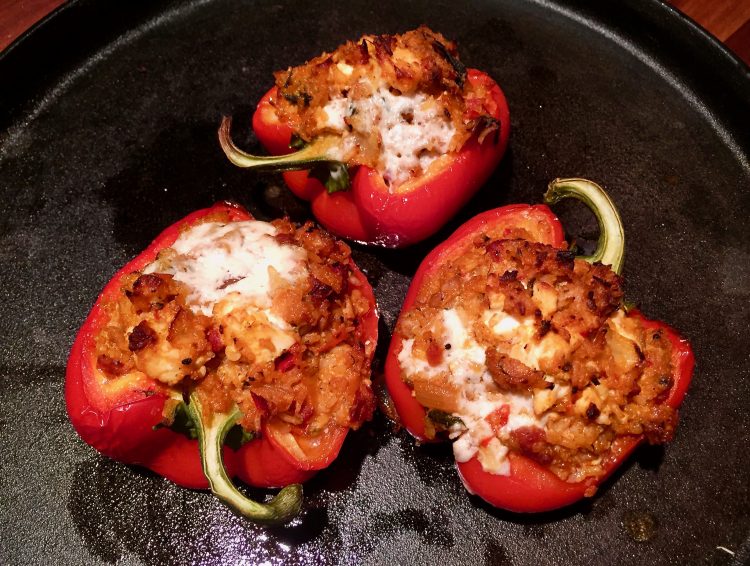 Shakshuka isn’t just for breakfast anymore!  This fabulous Middle Eastern feast is also a wonderful stuffing for grape leaves. Give it a whirl, these are the best stuffed peppers we ever had! 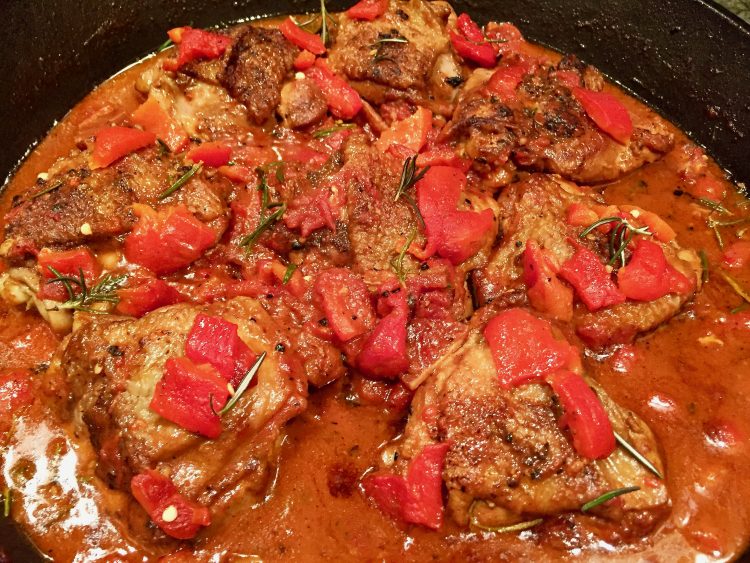 Of the 14 regions in the city of Rome, my favorite area to wander around with Rebekah is Trastevere, arm in arm, taking our time… strolling within its maze of narrow winding cobblestone streets. We like to get lost there. First we go to the Coliseum, stare in awe, and then we head for Trastevere to eat. 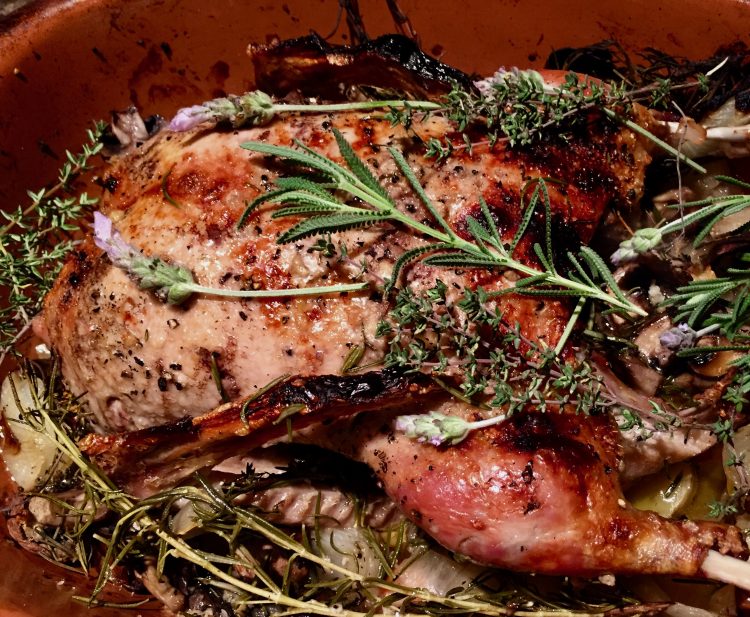 For years we have returned again and again to this simple savory feast… it’s like an old trusted friend.  We just tossed this chubby duck inside the clay pot along with tons of veggies, stuck it a cold oven, set it to 475 degrees and got back to the family fun.  An hour later, time to feast.  It’s that simple. 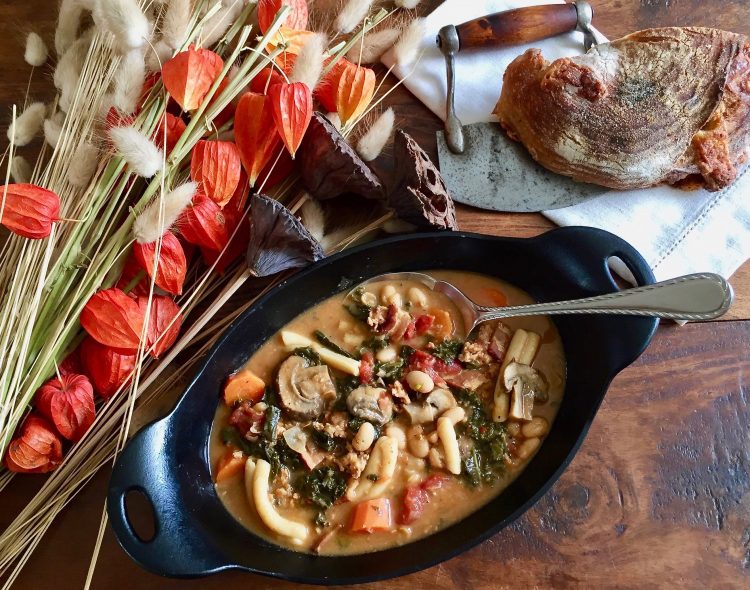 Pasta e Fagioli translates as Pasta and Beans but this dish is so much more than that. It’s a feast! This classic Italian dish is perfect when there is a bite to the air, and the dry leaves are blowing past the door. Build a fire in the fireplace and sit down to this classic rustic comfort food at the weathered kitchen table. This is an authentic Italian umami bomb, so rich and savory, often served with rosemary and garlic focaccia, or toasted Kalamata olive bread with cheese, and a rich red wine to stand up to it all. 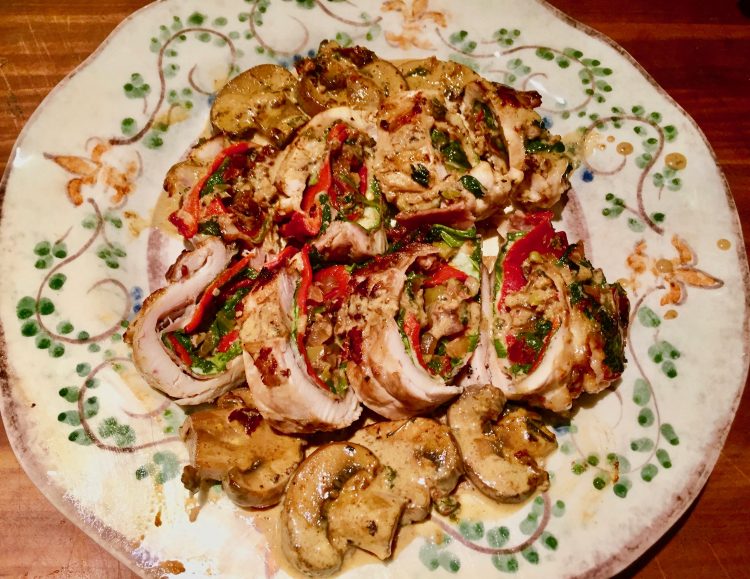 This is the Chicken Roulade of our dreams, the one we first experienced in Florence and the hill towns of Tuscany… the extravagant chicken roll that incorporates every savory ingredient we ever wanted to include. 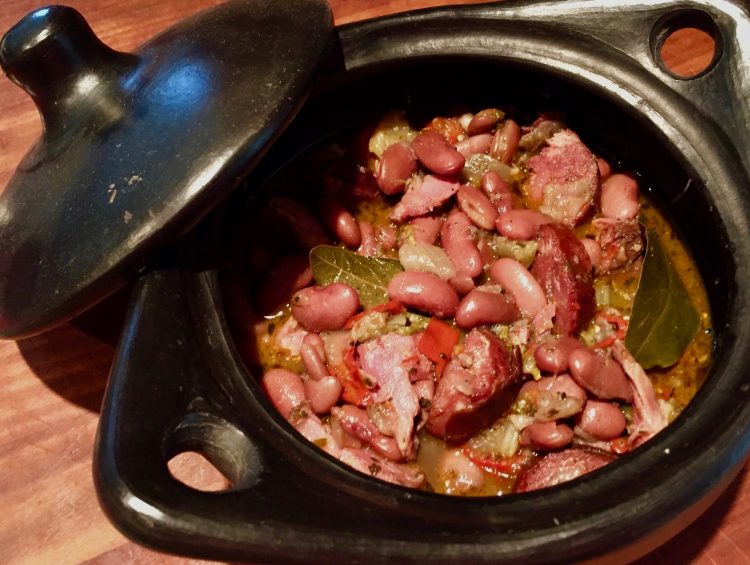 In many way, the Creoles of New Orleans may be the most quintessentially American society of all, the original American fusion. Comprised of the descendants of the French and Spanish who were born in Louisiana, it later came to include all races and cultures that shared this general background. They were always a highly sophisticated people, many educated in Paris. The Creole opened the French Opera house in 1859, and the city of New Orleans became the opera capital of America. When I think of this meal, Red Beans and Rice, I imagine the steamy languid Sundays of the Creole world of New Orleans in the 1800’s, ham on the table and French wine to accompany that. And then on Monday, which was called Laundry Day throughout the South, they used the scraps and bones from Sunday’s ham feast, tossed in some Red Beans and seasoning, and as it bubbled for hours, the tedious laundry work was accomplished along with a savory lunch. 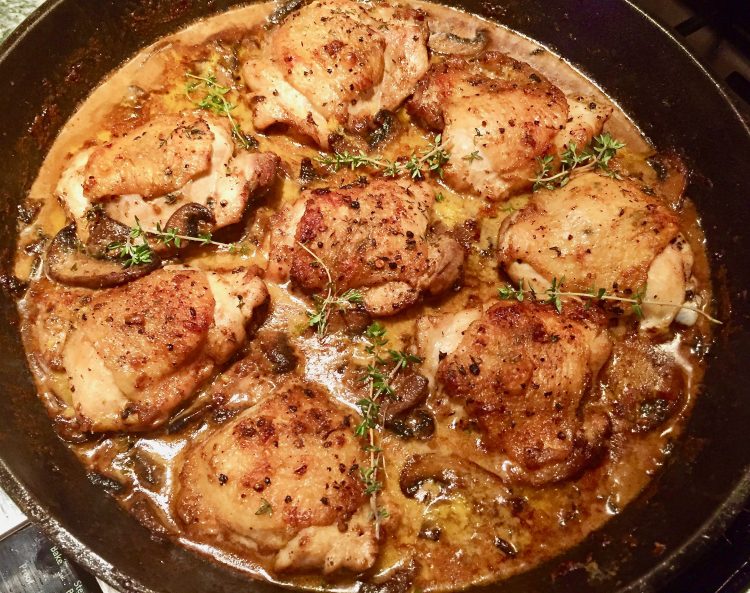 This feast is your ticket to Umami City. This is a fusion feast, as if it were cooked by two lovers, a lady chef from the South of France, bringing her thyme, cream, bacon, duck fat, Dijon mustard, butter and Chardonnay… and her chef lover from Tuscany, with his Porcini powder, Marsala, olive oil and garlic. It’s a magical dish for all lovers. 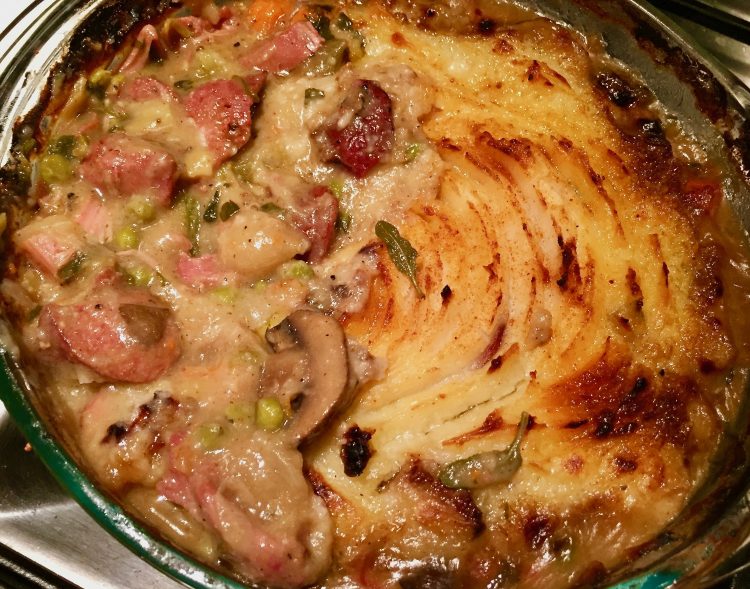 We first tasted this classic New England meal, appropriately enough, in the food hall of Harrod’s in London, many years ago. It was a revelation. This feast has a timeless wildness to it, that speaks of a life lived outdoors and long ago, and of the fireplace and hearth, the warmth of home in a rugged country. This is a meal created by rural working folks and those who hunted and labored in the outdoors and in the garden. 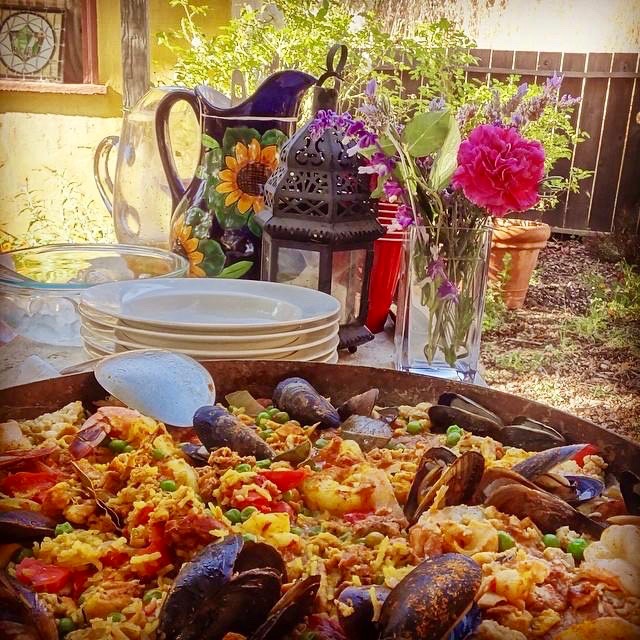 Paella is the signature meal of Spain, a national pride, and yet almost no one fully agrees on what it is or how is should be made. It is a controversial meal for many reasons… starting with the simple fact that it is a huge shallow pan loaded down with complex and expensive ingredients which completely vary from home to home, town to town, restaurant to restaurant, and from region to region in Spain. Paella in Madrid is very different from that in Seville. But at the same time, like Bouillabaisse from France, Paella is a classic meal so identified with the soul of the country that it naturally comes laden with emotion, memory, tradition, pride, and a sensory longing for the authenticity of the time and place of one’s upbringing. 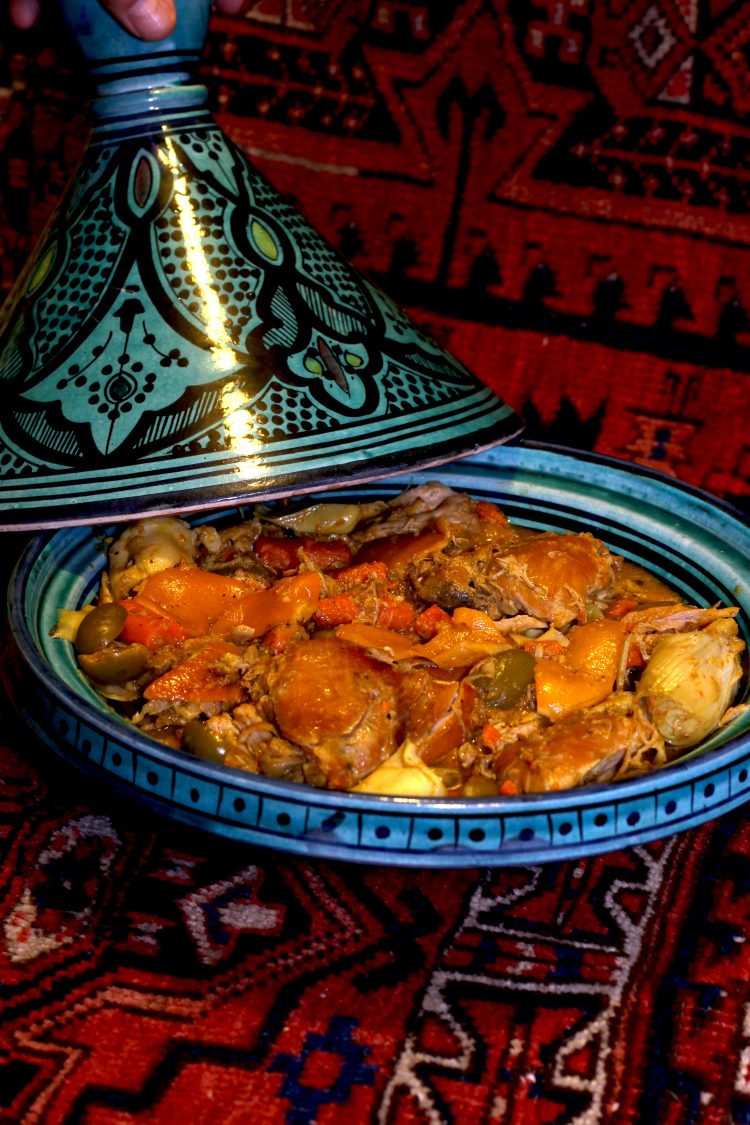 This is one of Rebekah’s signature feasts and one of our absolute favorites. Everything about it is sumptuous and savory and exotic, even the clay vessel it’s made in. The word “Tagine” is used for both the vessel and the meal itself, and a Tagine can be made in a myriad of ways, depending on the available ingredients. This recipe calls for chicken but we have also made it with rabbit and lamb, both of which are fabulous. Rebekah cans the Meyer lemons in wide mouth pint jars and stores them in the refrigerator for about six months, or up to a year, before use. ​ ​Over that time, as they preserve, the Meyer lemon skins become butter soft and creamy, and the salted juices thicken, developing an ethereal but penetrating aromatic liqueur which has the consistency of syrup.  Along with the saffron, green olives, ginger and roasted peppers, they fill the house with an intoxicating fragrance. 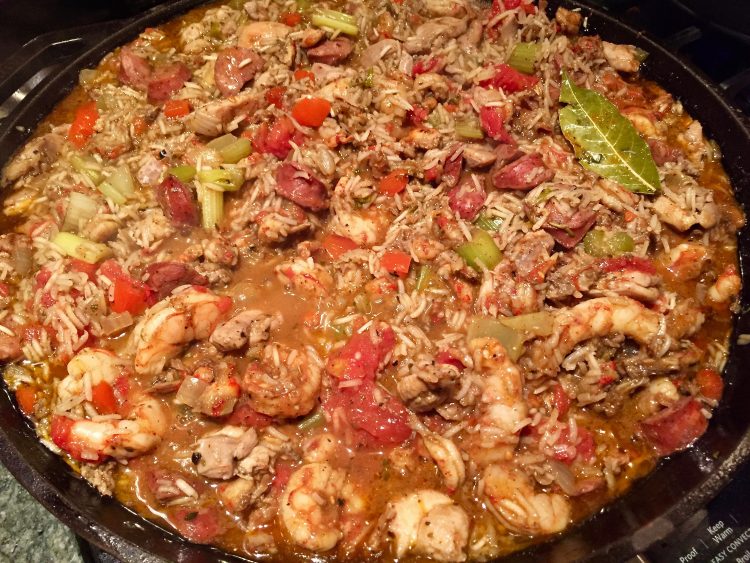 Jambalaya is illusive at its heart. It is, in essence, a rice meal… but that’s just the canvas the Creoles and the Cajuns use to paint one of their masterpieces. The rice is there to absorb all the umami juices of the meats and shellfish and seasoning, and in some ways, this meal is the coming together of the two traditional factions of the Cajun people, the Rice Cajuns and the Bayou Cajuns. The Rice Cajuns are those folks who, early on in their resettlement, were able to acquire slightly higher land in the interior, on which rice flourishes. For the folks living on these farms, pork and chicken were just as likely to be on the dinner table as Mud Bugs, turtles and shrimp, which the Bayou Cajuns netted for a living. So Jambalaya is a meal that combines all the traditional strengths of the Cajun people, and finding the authentic ingredients is crucial. 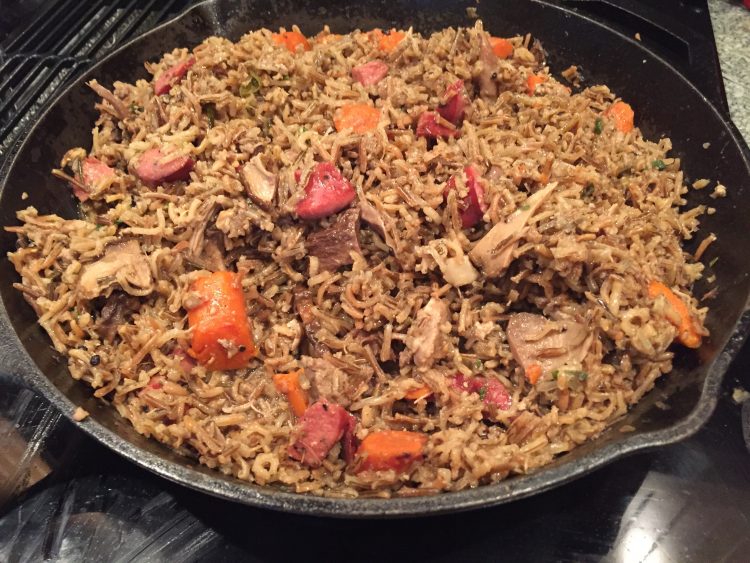 This feast comes from the heart of the North Country pines… northern Minnesota, the place where I did my real growing up, from boy to man, hunting and fishing in the wilds.  This iconic feast, legendary among the native peoples who live there, is the essence of wildness.  When you prepare the ingredients, and then feast on it, you can almost hear the cry of the loons out on the lake, in the dusk… and again at first light, as you ease your boat into the lily pads, casting for large mouth bass and northern pike.  It is so deep in my heart that every scrap of my DNA cries out to be there again, one day. 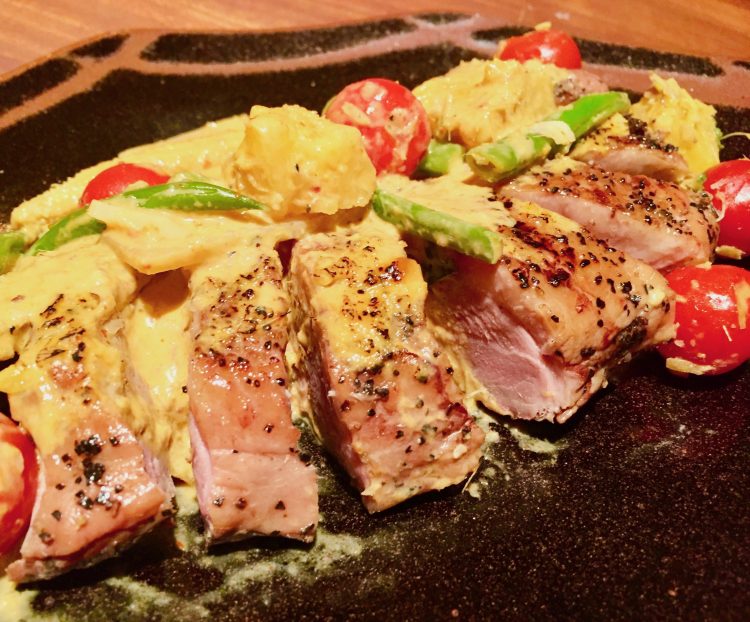 This fabulous umami feast explodes with flavor because of the wildly contrasting tastes… the rich deep dark pink meat of the duck breast match perfectly with the spicy red curry, and the bright sweet taste of the pineapple and the tomatoes contrast wonderfully with the richness of the coconut cream and the umami fish sauce.  It’s also addictive, like the best meals from Thailand, with the amazing fresh flavors of the lemongrass, Kiffir lime leaves, Thai basil, mint and cilantro.